No matter what you do, no matter how you slice it, a business has one goal: to solve a problem.

Everything else is extraneous.

You have a job to do

I’m a huge proponent of Jobs to be Done (JTBD), which was introduced to me by my buddy Phil Caravaggio (read about his amazing connection to Ray Dalio’s Principle).

The premise behind JTBD is pretty simple: your customer hires you to solve a job they have.

But at the end of the day – there’s a job to be done, and your job is to solve it.

I’ll give you a simple example.

Recently, a Museum of Illusions opened up in Toronto, and I was psyched to go check it out. Being the engineering nerd I am, I was looking forward to having my eyes deceive my brain, and then learning about how that happened.

And it was awesome! My brain would be summarily tricked, and then I’d read the placard next to each exhibit to understand the science behind what happened.

About halfway through the museum, I was waiting for some ladies to finish taking pictures when I realized what was going on – I was one of the few people reading the placards. Instead, most people were taking pictures of themselves/their friends inside the installations.

And that’s when it dawned on me – the Museum of Illusions’ main job was not to impress upon people the simplicity of the human brain.

Nope. Their main job – the problem they were solving – was “I want to take a picture/video of something cool and atypical that will make people go “ooooh that is cool.”

And that’s when I realized why there were stickers on the ground for ‘take a picture here.’ Why there were so many funky colors. And why so many people were dressed up!

This may come across off as judgemental, but I promise you it’s not. It’s merely the reality. And in fact the Museum was solving a job for three different groups of people:

And they were doing a bang up job on solving that problem.

Your business has one job: to solve a problem.

An important thing to remember is that the problem doesn’t need to be logical or even a “real” problem. It simply needs to solve a problem someone feels they have.

Think about all the ads you see around “being cool.” Tobacco. Alcohol. Soda. Shit you don’t need, and shit we know doesn’t make you cool… but still sold as the solution to your problem of “not being cool.”

If someone thinks it’s a problem and you can solve it – that’s the job of your business.

You have to get to the underlying truth of the problem

JTBD isn’t just about the superficial problem, but the underlying truth that someone is seeking.

Have you ever heard of the girlfriend experience?

If you haven’t heard of it, it’s where a person hires an escort, but not (just) for sex – instead, they want to have the experience of being in a relationship.

So they’ll go out on a “date.” The woman will coo over you. You guys will have a conversation. You’ll come back and (likey) have sex.

The superficial problem: I want to have sex.

The underlying problem: I want companionship.

I’m sure you’ve heard stories of escorts and prostitutes being hired by men and never having to perform any sexual acts – instead, they simply hear the men out.

So while ostensibly someone hires an escort for sexual gratification, the real problem they have is a lack of companionship.

The 5 Whys work perfectly here – you need to dig deep to find the real why.

You can absolutely work the superficial and build a successful business. But if you can solve the underlying problem, you’ll have a far more robust business.

You can also solve for multiple problems

At times you can simultaneously solve a problem for two groups of people.

The most obvious example are marketplaces. Something like eBay or craigslist solves a problem for two parties:

Even something as simple as the advertising content business – you’re solving the problem for two sets of people.

For your readers, you are solving their problem of wanting information/news/analysis they seek.

For your advertisers, you’re solving the problem of helping them get their product/service/brand in front of the people they wish to sell to.

It’s harder to get a business going that simultaneously solves the problem for two groups (think of any marketplace), but if you can pull it off, it can be quite lucrative.

A business can solve problems for multiple groups simultaneously.

You have one job

If you haven’t seen it before, “you had one job” is a concise representation of your business. 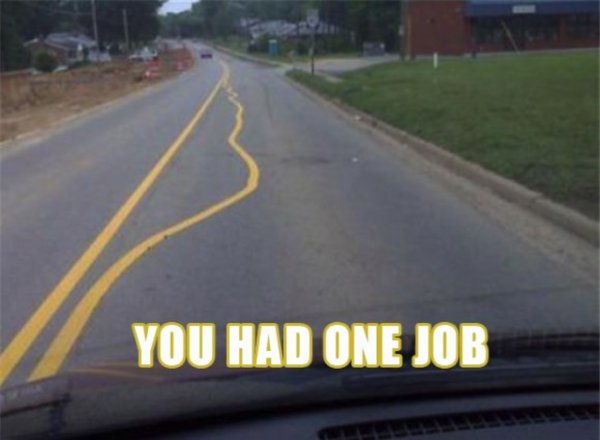 No matter how you slice or dice it, there is a singular truth about your business: you have one job (to solve someone’s specific problem).

It is not for you to judge the problem. It is for you to figure out if there is enough of a market to solve that problem.

A business exists to solve a problem.

Leave behind the people trying to sell you their consulting or coaching gigs. Follow SJO.com for real-life experienced advice and thoughts.

Success! Now check your email to confirm your subscription.