Necessity is the mother of invention

Just under 2 weeks ago, I had shoulder surgery. My labrum was torn in two places, and they had had to drill 3 screws into my bone to properly re-attach it so it could heal.

Post-surgery, my right (dominant) arm was useless, tightly snug against my body in a sling. I was told to stay in that sling for 2 weeks, my primary form of exercise being “making a fist.”

So I was in a bit of a jam. I am not one to just lounge around. How was I supposed to do any work with one functioning arm? Even more annoying, I use one of those ergonomic keyboards, and pecking keys with one hand across those would drive even the calmest of people mad. 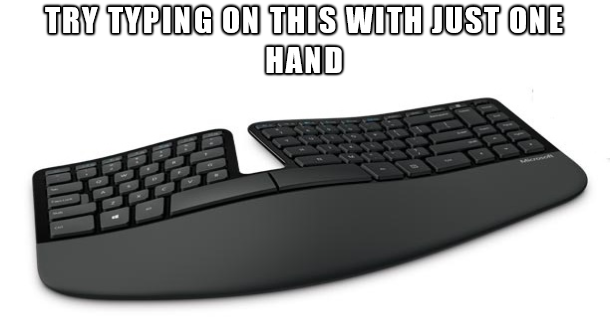 And voice dictation was not an option either. With all the acronyms in my day-to-day emails, I spent almost as much type fixing errors as it would have taken me to just type then one-handed.

Parkinson’s Law: “work expands so as to fill the time available for its completion”.

It may be hyperbolic, but when Peter Gibbons says “I’d say in a given week I probably only do about fifteen minutes of real, actual, work” in Office Space, there is an underlying truth to it.

Working 40 hours is not the same as being productive for 40 hours.

And while I will get more into this in a future post, I personally am almost obsessive about chunking aside time to get deep work done. I was talking to a friend about being productive yesterday, and how I only do maybe a few hours of really good work a day (and I would warrant that is more than most people).

An Experiment in Productivity

So I decided that this would be the perfect time to do an experiment in productivity.

Inspired by my friend Maneesh, who had hired someone to slap him when he started on social media, I decided to hire someone to type on my behalf. She would basically be my hands – I’d tell her what to do and what to write.

The hypothesis to test was simple – would having an intermediary between me and my work increase productivity?

The logic was sound – by having to pay someone, I would have to be focused on the task at hand. The chances of me wasting time on Facebook or reddit would be nil as the typist would be just sitting around idly (on my dime!)

So I asked some friends, and no one had ever done this. I ended up just posting on Craigslist, and hiring a lady who had previously done receptionist work. I paid her $15.00/hr (the minimum wage in Ontario is $11.25/hr), as I wanted someone with experience (hiring a student would have been cheaper)

I normally work from ~9am to 2pm, and to keep things tight (plus I was on painkillers and would get exhausted easily), we did 3-4 hours a day, with a ~30m lunch break.

The setup was pretty easy. She sat at my desk (I have a standing desk with a tall chair), and I hovered off to the side, telling her what page to go to, what to click on, what to write.

So what did we discover?

It was also great as, invoking Parkinson’s Law here, we marched forward relentlessly. My normal flow is 30-60m of concentrated work, a long break, and repeat. In this case, we kept going. As I had been busy leading up to the surgery (and days after it), my (normally empty) inbox had grown quite a bit. It was nice emptying it out back to inbox zero.

With that said, I would personally never do this again. Why? Because the downsides did not play well with me (mind you, I would still recommend you try it out).

To generalize, I would say there are three levels of work – superficial (eg delegation via email), a bit more-involved (requires some thinking, but you can still kind of multi-task), and deep work (something that requires 100% focus and attention).

Hiring someone else as your hands made it great to knock out the superficial, and even the more-involved work, but it was impossible to do deep work.

I can only get deep work done in a certain environment – I have one screen where I read, another one where I write down notes, and a third screen where I do research relevant to what I’m focused on. It can be both quite still (as I read something), and spastic (as I jump around doing research on the topic at hand).

Having someone else as my hands made that impossible. Furthermore, having someone just sitting there doing nothing while I tried to read and focus was near impossible – I was just straight up uncomfortable.

The other big reason it failed for me (and why I recommend you try it) is because I type so fast; I type at roughly 140-150 wpm. 150 wpm is roughly how fast we speak. At 100 wpm, she was a skilled typist, but… I felt everything was sluggish. What would take me 30m (knocking out emails) instead took an hour.

Treating this as an experiment, hiring someone to be my hands did not pan out. For me, compared to my baseline or productivity, I felt like I got less done. Coupled with it leaving me a bit frustrated, I will not be doing this in the future.

With that said – I highly recommend you try it out. Honestly, if she typed as fast as I did, I would likely have her come in a few hours a week, and just grind through my emails with her. I would also do the same if I struggled with staying focused and being productive.

If you struggle with being focus or being productive, try hiring someone to be your “hands.” It’s a low-cost way of getting things done.

Another fun experiment in productivity. Be sure to enter your email before if you want more no-nonsense information on being an entrepreneur.