Have you seen Seth Godin’s What does it sound like when you change your mind?

The thing is a monster. A beast of burden. A magnum opus.

Just to ensure you realize I’m not overselling it, here’s a foto so you can see how gargantuan it is: 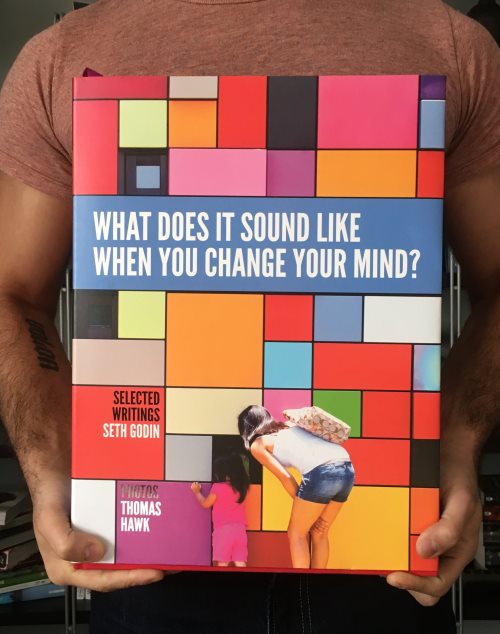 Must have taken forever to write right?

My last article was about how you should be repurposing content, not just creating new content all the time. It’s something that’s been fermenting in my head for a while.

It’s a mix of repurposing your content and also taking an iterative approach.

I find most entrepreneur origin stories obnoxiously deceptive. The parable of the rags-to-riches story is usually full of shit, with a majority of entrepreneurs getting breaks or advantages most people do not have (and fail to have the self-awareness to recognize it as such).

Let me be clear: this is not a reason to throw a pity-party for yourself. It’s just to be aware of the realities we work in.

So when I came across a story about a founder who had gotten $30k from his dad (and a grant from the government), I couldn’t resist…

Look – I don't want to sound like an asshole, and what @acasalena did is amazing and not something *I* could do, but can we also be real? 99% of people don't have a father to lend them $30k to get going…

This is why I HATE most entrepreneur origin stories. NON-REPLICABLE. pic.twitter.com/nytOsZvH4D

There were some interesting responses.

You’ll see that a few comments go off the rails. Someone equivocated a $30000 loan from your old man to borrowing $30000 from a credit card (you know, minus the punitive minimum APR of 19.99 or the ability for a default cratering your credit score and putting you into bankruptcy).

Mark Manson (author of the How to not give a fuck) chimed in with an interesting observation that this is not only true for entrepreneurs, but many thinkers and artists also came from means.

3. I’m currently writing an article on the mythos of the rags-to-riches narrative.

From a simple angry-tweet into a full-blown article, it’s a bit of the inverse of what I said (create content, then chunk it down), but the same underlying principle is there: repurpose content across different channels of distribution.

Check out the inside cover: 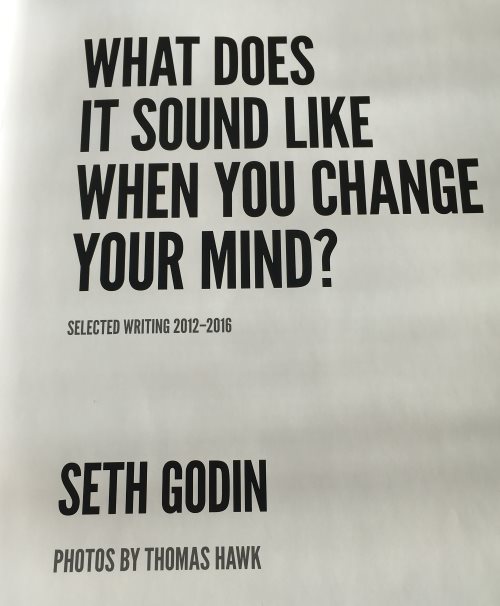 The reason it didn’t take Seth an insane amount of time was because he went through four years of posts on his indefatigable blog, chose his favorites, re-ordered them, added some stunning imagery, built a narrative, and put it all together.

I do want to note it’s pretty damn beautiful. My lady and I sit down frequently after dinner and just read through a few pages and discuss what we read. It’s unquestionably worth it, and a great gift to boot!

The point here is that Seth did exactly what I talked about – he repurposed his content. He took his blog posts, put it through the grinder, and out popped this epic 800-page book.

And solely based on the fact that it’s put together with a narrative structure (and a beautifully created book), I cannot think of a single owner who has it thinking “oh well, I could have just read his posts online.”

This isn’t the first time he’s done it either – it’s the second time!

Seth brilliantly re-purposed his existing blog content and put it together into a tome of a book.

1. I’ve talked about how important it is to generate output, even if it isn’t as great as you’d like.

2. When talking about Seth’s book, I mentioned this:

“he went through four years of posts”

Do you have four years worth of posts?

Note: Seth posts every day, so his four years worth of posts means roughly ~1500 posts (that man lives by the output rule eh!). So let me rephrase:

But you know where I have a ton of posts? Facebook.

So, why not take my existing Facebook posts (that are relevant to entrepreneurship and productivity and a dandy of a life) and throw them on SJO?

It’s not like Google is indexing my FB posts. My post on $30k to start entrepreneurship? If I didn’t write about it on SJO, it would disappear into the abyss. The 100+ comments in that one status? An evanescent conversation, fading from everyone’s memory already.

Inspired by Seth, if you’re regularly outputting anywhere, it behooves you to make it accessible on the web.

You may remember one of my last experiments was to see what people were googling about me and then create pages around them (with the top page by far being “Sol Orwell net worth,” and “Sol Orwell wife” being a wtf? second)

My latest experiment is Quick Thoughts.

I’m taking my Facebook posts and adding them as quickie blog posts.

It’s a sublist for those that want a near-daily email on whatever I’m ruminating upon at that moment.

I’m repurposing my content: making it accessible to the Googles and also to people who may eschew social media (or find it weird that I don’t have a Facebook page, just a regular ol’ profile page).

If you’re interested in getting email updates on Quick Thoughts, enter your email below:

I read my FB comments. I engage in them. I learn from them…

I’m quite curious if this has an impact on them.

And I’ll be posting an update in six months to see how it stuck.

One last thing – the title for Seth’s behemoth of a book came from this post: What does it sound like when you change your mind?

I’m going to have to really up my title game!