THE END OF AN ERA…

Every birthday my woman makes me six desserts. I don’t even know how we settled on six… I assume five seemed too little, and seven just seemed ostentatious.

Last year she threw a curve ball. For the sixth dessert she convinced Milton, purveyor of the insanely delicious Le Gourmand cookies, to make a giant cast iron version.

To say it was buttery chocolatey goodness would be an understatement for the beast it was.

I spent the subsequent 12 months haranguing Milton to not only sell the giant cookie to the public but to call it the SOL cookie.

I’ve always wanted a food item on a menu named after me, and what would be more me than a gigantic ridiculous 6000+ calorie chocolate chip cookie?

Roughly three weeks ago, my relentlessness paid off, and the man agreed to put it on sale. He’s already had a few people order the beast they all loved it.

The cookie will debut publicly at some point this week, and here it is in all of its bestial glory (with a “regular” sized cookie on top for a size comparison).

For those that watched the brilliance that is Seinfeld, one of my fav moments was when George Costanza decides to leave all conversations “on a high note”

As such, after my flurry of #cookielife pics uploaded over the weekend, I think it’s time to retire the #cookielife.

The charity food offs will continue. My love for cookies remains unabated. Giant chocolate bars will still be crafted.

But with 200+ cookies and treats mailed to me in the past 20 months, and the debut of the SOL COOKIE (at a ridiculous 3.5lb), it’s the perfect high note to end on.

Now to begin something else ridiculous…

And if you want the full story: #cookielife – how I convinced 200+ people to send me cookies and raised $50000+ for charity. 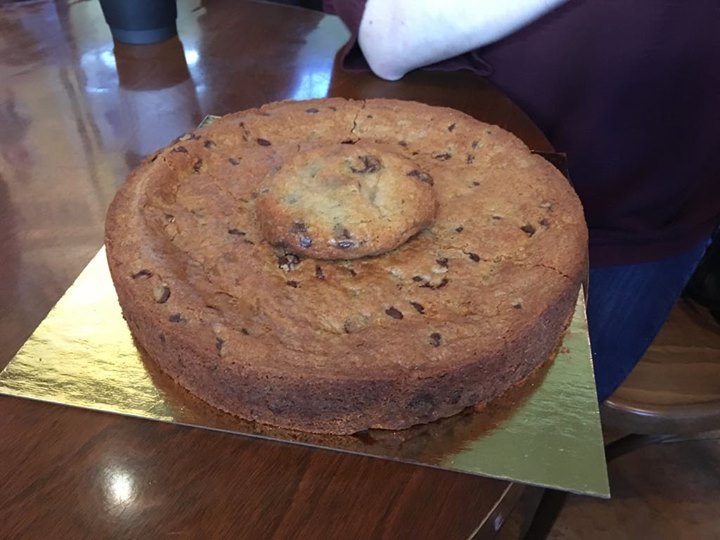 Posted on February 19, 2018 | Comments | Permalink
Previous: Be the hubNext: Why is diet dogmatic?