I’m not a fan of quotes, but this one from Steve Jobs is the truth:

You can’t connect the dots looking forward; you can only connect them looking backwards. So you have to trust that the dots will somehow connect in your future.

Let’s take a break from theory and conjecture – I want to give you a real-life example on how focusing on developing friendships instead of “networking” and being part of something bigger than yourself opens up the world for you.

The power of reputation

One of my fav events to attend as an entrepreneur is MMT. It’s organized by my buddy Jayson (I got that Steve Jobs quote from him).

Jayson is one of the nicest humans being I’ve ever met. He’s the kind of guy that’s so nice that you want to grab him by his shoulders and shake him and tell him to be a bit meaner.

Now part of what makes MMT so different (and to toot my own horn, my charity food offs) is that Jayson has no problem selling out the event.

Why? Because going in, you know that everyone else has been vetted by Jayson and was explicitly invited to attend. You don’t need to concern yourself with wantrapreneurs or people whose bios resemble a potpourri of trendy buzzwords (think: influencer, investor, crypto, entrepreneur, etc).

Subsequently, this means you can hang out with your guard down because you know that no one is there to get their eFame on or climb some social ladder or any other similar bullshit.

We trust Jayson in that he brings awesome people together.

So I was attending MMT last year, and one of the activities was a bunch of us going to the Tesla factory.

On the way back we got mired in traffic; we ended up stopping to grab some drinks to make the ride back more pleasant.

During that pit stop I met a man named Barry.

You meet people in the most random ways.

Focus on friends, not network

Barry is in wealth management. He lives in DC. He’s got kids.

We’re in different worlds. If I had tried to get my network on with Barry, it would not have worked.

But we connected on Facebook, and I saw that he was posting pics during NBA games.

As someone who loves the NBA, I excitedly commented on his amazing photography.

And that is how we got to know each other.

It wasn’t about his professional work or where he hangs out in DC… it was about our mutual love for the NBA (and subsequently, food and much more).

I focus on befriending people based on our mutual interests.

It’s important to note that people can tell when you’re faking it. I wasn’t thinking “oh this guy likes the NBA so I’ll pretend to.” It was about “oh shit, we share the same interests, cool!”

I was just open to whatever was in front of me.

Don’t be closed off; be open to whatever unexpected happenstance may occur.

Similar to how Jayson is very particular about how he invites to MMT, I am very protective about who I invite to the NYC Cookie Off. I want people I’d want to hang with, not just people who make me look good.

So I invited Barry to the Cookie Off, and he was excited to attend. Boom, two tickets sold, $500 for charity.

A while before the event, Barry let me know that he wouldn’t be able to make it. Unfortunate, but understandable; he’s a busy dude who is good at what he does, and things pop up.

A week after the event, he again re-iterated how it sucked he was unable to make it, but that he wanted to make it up to me.

Now I really want to pause and note this.

Some guy that I had admittedly spent maybe fifteen minutes of face time with who had given me five hundred dollars for charity was apologizing to me and that he wanted to make it up to me?

My response: go on….

So Barry tells me that he has courtside seats to the Washington Wizards vs the Toronto Raptors Feb 1 in DC. If I could make it to DC, he’d take me out to dinner and the game and we can have a gingangooly of a time.

What ended up happening was I spent a few days in NYC (which involved meeting many awesome people) and then a few nights in DC.

Not only did Barry take me to dinner and the game, but the night before, he helped organize a dinner of kickass entrepreneurs in DC. We got to eat delectable food, drink strong liquor, shoot the shit, and just hang out as humans.

Look at this motley crew: 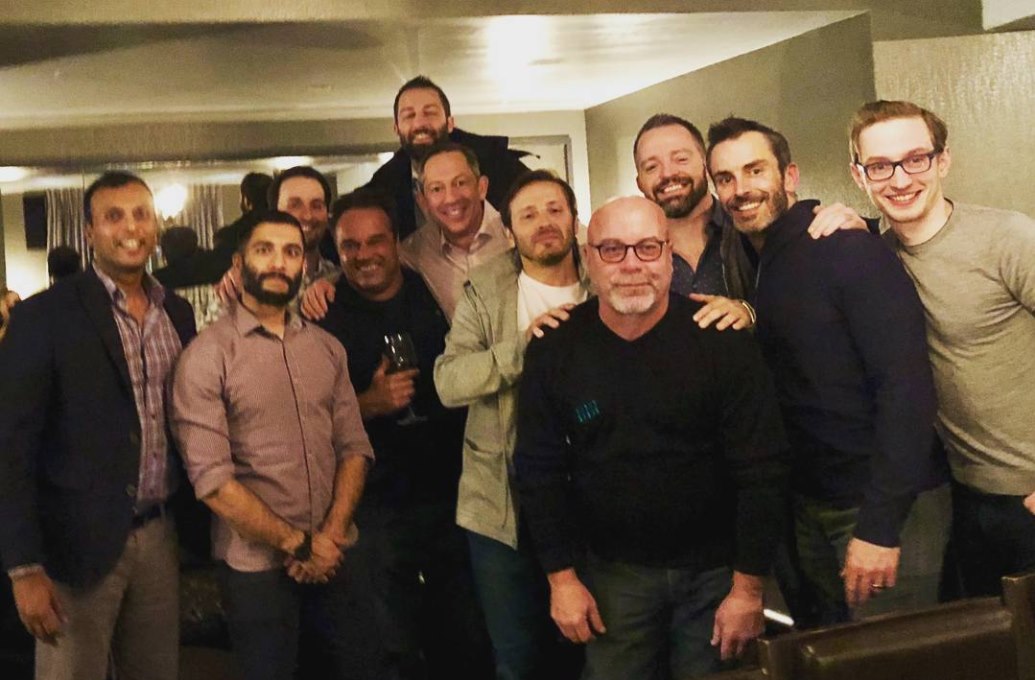 And here’s us at the game (it was a miracle and the Raptors lost to the Wizards): 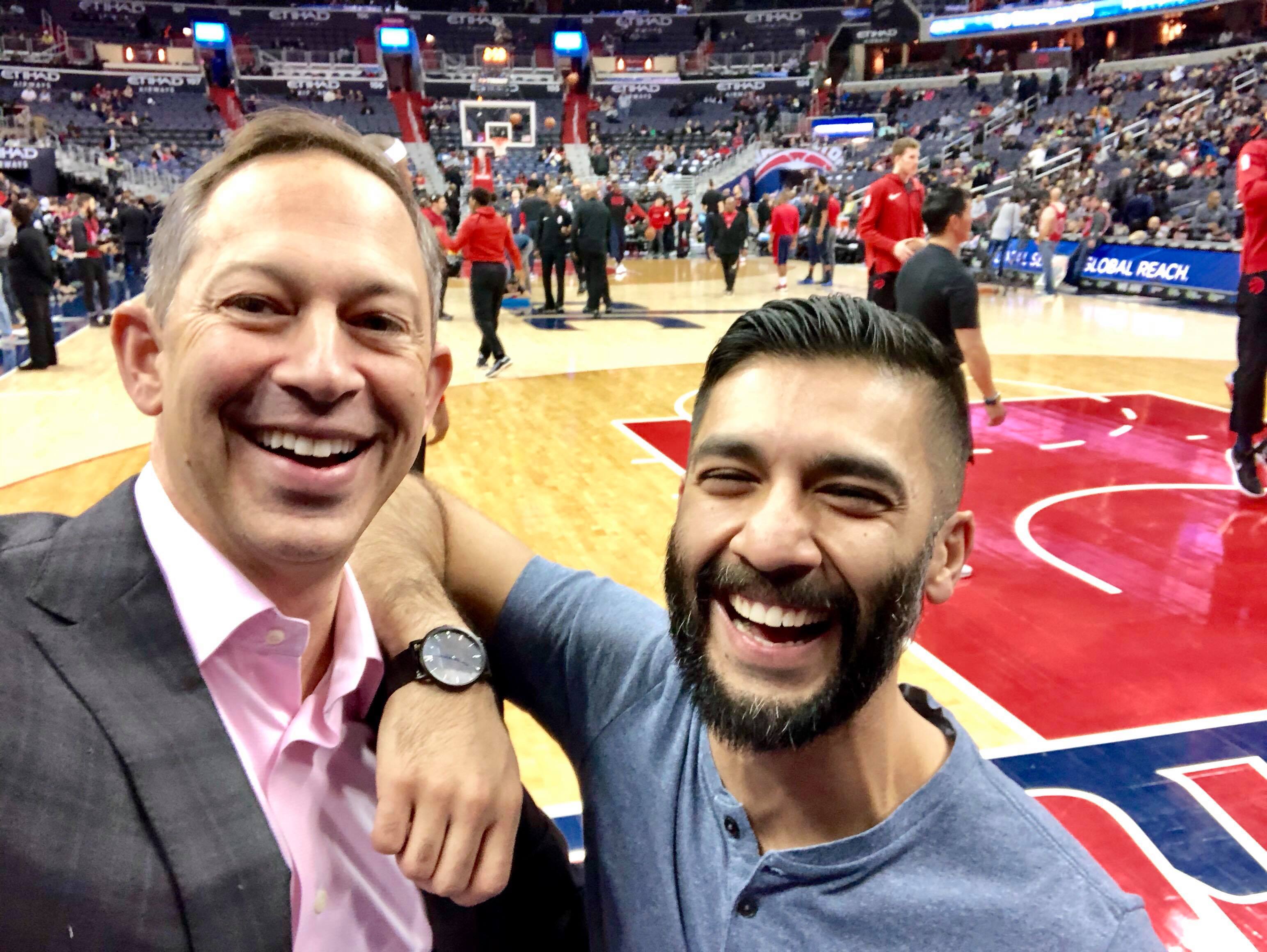 There were so many threads of conversation to pull upon, and that’s what we did. We didn’t focus on business talk. That simply naturally weaved into our conversations where it mattered…

There are so many things to take away from this. Let me try to sum up a few:

It’s near impossible to quantify it, but it really really matters. Simply because Barry trusted Jayson, he trusted me.

My trust also extends to Jayson. I’ve sent many people his way for both MMT and the various workshops he does because I know he puts in the work.

Be a part of something bigger than yourself.

Barry and I were chatting before the group dinner, and he mentioned that MMT was akin to a frat, but better.

And wow, that hit me hard. MMT isn’t just an event, it’s something bigger. And I realize it makes me sound like I’m drinking the kool-aid (and maybe I am?), but I’ve met many an amazing individual through the event, and I’ve also gone out of my way to help people that are part of MMT (even though I didn’t know them myself).

(Side note: it’s amazing how a seemingly random throwaway comment from you can make a tremendous impact on someone else!)

I honestly think that is what made the #cookielife tick. People wanted to be part of something that was bigger.

I said this before, but I want to reiterate this: Networking is blase, making friends is fun.

Focus on shared interests and bonds. And if you can’t find any – that’s okay! There are enough interesting people in the world that you don’t have to get along with everyone. The Internet has broken down geographic barriers, so find people you jive with.

Barry’s photography (which is how I found out about his love for the NBA) is interesting. He’s good at it, but he doesn’t sell anything. Instead, he blows up and gets pictures frame-ready for people he likes.

Similarly, the Cookie Off is interesting. Not only is it atypical, but it’s also about something bigger than yourself (charity!)

And that my friends is how you get your “network on.” Which is to say, you eschew the entire idea of it and instead focus on being interesting, being part of something bigger than yourself, and developing friendships.

I feel like a broken record repeating the same shit, but finding success and having fun and unique experiences becomes inevitable when you focus on building real relationships, not just connections.

In fact: dreams are for suckers; smart people achieve through inevitability.