I’ve always been obsessed with stories. As a precocious kid, I was obsessed with reading – they opened up portals (sometimes literally in those books) to worlds, ideas, and experiences I found unfathomable. After all, living in Saudi Arabia, I was stranded to my own devices.

And so I’ve always tried to live my life as a collection of stories. In essence:

“Would I read my own memoirs?”

I just finished “A million miles in a thousand years,” which is a bit of a meta-story on someone who wrote their memoirs, and was then recruited to transform those memoirs into a movie.

Structured as a ‘what happens when you edit your life,’ it does an amazing job smashing “your life and how you experience it” with “a compelling story must have x y z elements.”

And I’d never really made the direct connection between taking what makes a compelling story (the hero’s journey) to my own life.

“People love to have lived a great story, but few people like the work it takes to make it happen. Joy costs pain.”

Both are brutally honest. I talked about this in failure a while ago – that most of our stories on failure come when there’s an obvious fork in the road; when we have to make a decision. And it just so happens that the person who is telling you the story happened to make the right one.

In the book, this kind of fork-in-the-road was called an ‘inciting incident’ – something that once happened you couldn’t turn back from.

A lot of great entrepreneur stories come out of that an inciting incident – “I was just so fed up and had quit my job, so I had to make this work.”

A lot of great sports stories come out of an inciting incident – “I was either going to focus on sports or be a part of the gang life.”

And there is great pain after the inciting incident. There is grueling work to put in. Hell, watch a workout video of James Harrison going at it.

But you can also create your own fork, sans inciting incident.

Some people also make shit happen out of sheer desire and relentless.

In the book is a character named Bob. Bob and his family agreed that New Years Day itself was the most boring day of the year. So they decided to throw a parade in their neighborhood which would end with a feast at their house. But to make the parade unique, it was a parade that you were not allowed to watch – you had to be a part of it.

And so they recruited a few neighbors; it was a smashing success, with a few dozen people going down the street being part of a parade.

And now, a dozen years later, it’s become a neighborhood tradition that has spawned off its own little ecosphere (they choose a grand marshall, a queen of the parade, and so forth).

And I realize THAT kind of position is where I’m at. Just doing things and recruiting people to join us.

I started an intense BBQ-off during the Super Bowl where the winner gets a WWE-style championship belt. 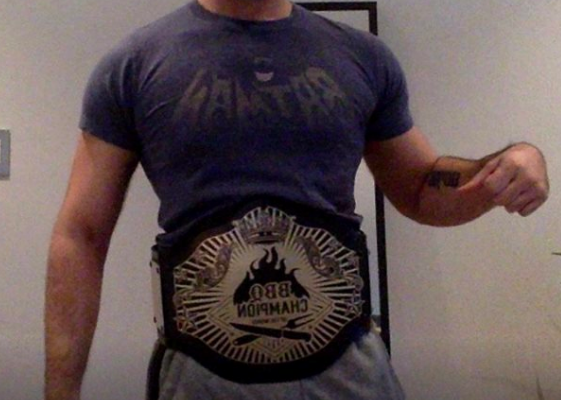 Me after I won

We had our third annual ice cream crawl a few weekends ago.

All of them have created interesting stories and moments in my life.

But even smaller things – overlapping my coffee meetings, organizing a couple of entrepreneur dinners a month, proactively doing introductions – that’s me creating stories in my life.

Let me give you one final example.

I am a huge fan of Le Gourmand, purveyor of my favorite chocolate chip cookies in Toronto. Through the owner (Milton), I came across Lotte, who works for Callebaut (high-end chocolate company).

I reached out to Lotte, and we met up at Le Gourmand (of course).

Her and I got along well. And so when the Chocolate Chip Cookie was coming up, she introduced me to a few industry people that would be possibly interested in attending.

(I wanted to ensure the competitors got maximum love).

One of them was Sophie Mendes of Restaurants Canada (RC).

Sophie and I met at the event, and a week later, I went to chat with her at RC.

We talked about a variety of things, including the power of food and how it brings cultures together.

A week later, I ran into her and her husband on the street. We exchanged pleasantries, and then she told me about her project – how she was working on a cookbook that had one recipe from all the various ethnicities found in Toronto.

I immediately got excited and told her I knew tons of people from various backgrounds who could be a part of this! So I introduced her to friends from Turkey, Venezuela, Bangladesh, Ghana, and more (and kept telling her I’d be happy to introduce her to pretty much anyone).

Now, I can’t cook a lick of Kashmiri/Pakistani food, so I had my mom make some paneer with onions.

After some false starts, we got it organized so that on a Friday night she would come over with the fotographer, take some pics of the food, and fin!

But I thought hey – since I’ve already sent you some of my friends, why not invite a few of them over and get all of them done at once?

(Admittedly my reason was that I’d get to try to eat all the food).

So a few Fridays ago, we had the following people and their different backgrounds at our place:

I brought the paneer, the guy from Bangladesh brought biryani, and my friend from Ghana brought some apple pie cookies (he’s a baker, and his mom is making some peanut chicken but didn’t have time to make it).

And so pictures were taken of the food, questions about the food were answered, and then the eight of us had a deliciously delightful meal where we talked about things of consequence and things of no consequence, and all left with our bellies full of goodness.

Is the story of us eating food an epic tale? Nah.

But it is another interesting and memorable pattern weaved into the story of our collective lives.

And any good life is comprised of a stack of memorable scenes.

And the stack doesn’t care if the scene was a failure or a success. It just cares that something memorable happened.