If you’re complicit in sharing and spreading misinformation, are you not part of the problem?

Muslims “offended” (as they always are)

Way back in 2006, I remember a story that spread far and wide: “Muslim community offended by Apple NYC cube store because it looks like Kaaba in Mecca.”

All the tech sites covered it – Digg (back when it was a juggernaut), CNet, Engadget, Gizmodo, and all of the significant Apple news sites.

I remember reading it and thinking “This makes no fucking sense – who the hell cares about a box building?!”

Smelling something fishy, I dug into it – the only source I could find was MEMRI, which did not source the claim. At the time I had a blog network, and we published a snarky counter-point: “Muslim Community Responds: We Love the Apple NYC Cube” which cited an “unverified anonymous Muslim on a random website” who said, “I Think the Apple cube in New York is awesomeness!”

Of course, I was the anonymous Muslim (before I lost my religion and name change). It was a simple example to mock the foolish idea that some council existed that spoke for over a billion people.

Alas, we all know that a lie spreads far faster than the truth.

Eventually, NY Post (of all the places) got the source from MEMRI – an anonymous person on a message board.

(Notice how I called it with the ‘unverified anonymous Muslim on a random website” before MEMRI sourced their claim).

Can you fucking believe that shit?

From a single anonymous idiot (with zero proof they were indeed a Muslim) the lede that came out was “Muslim community OUTRAGED by Apple NYC story.”

You read those kinds of headlines enough times, and you’ll start believing in ‘us versus them’ pretty quickly.

Of course, if people had engaged in any critical thinking and asked “does this even make sense?” this story would have never spread past MEMRI.

Unfortunately, no one did. No one even critically assesses what they’re reading – we already know headlines are created as clickbait, but when we see one that agrees with our point of view (political, social, religious, whatever), we immediately assume they are right to show the “others” as wrong.

Even worse, we become complicit in this garbage by sharing it and being upset about it.

And I see this more and more – headlines with people raging “OH NO THE PC CULTURE HAS GONE TOO FAR”… except if you actually read the article, you’ll see it’s just one or two worrywarts.

And that’s what’s important to delineate between: is it an actual situation of outrage, or is it just one or two idiots being blown out of proportion.

Back when that entire Apple thing happened, I remember reading a comment by someone who said that the apple logo reminded him of original sin and thus all fellow true Christians should boycott Apple.

I may be a bit old now, but I’m pretty sure there was no “Christians offended by the similarity between Apple logo and original sin.”

And I’m sure if someone had, someone else would have screamed “#notallchristians.”

We need to stop and ask ourselves – what’s the motive behind someone pushing such a sensationalist headline that misrepresents reality?

The probability of someone being stupid is incredibly high

2% of them think the Earth is flat.

Three years ago, 30% of people said they think Obama is Muslim. 20% said they believe he was born outside of the US.

65 million Americans think Obama was not born in the US.

84.5 million Americans think the Sun revolves around the Earth.

55 million Americans think that social media bots are attempting to manipulate what you see for good reasons?!!

I could go on and on, but my favorite is that roughly 23 million Americans think that chocolate milk comes from brown cows.

There are idiots everywhere. But you’re just as stupid if you take the opinions of a few people and extend them to an entire demographic.

Don’t be part of the problem

Everywhere you turn on social media, you can see people lumping all the “others” as the same while treating everyone in their tribe as a unique individual.

I cannot tell you how many times I’ve seen someone extrapolate the evil actions of a few Muslims to “all Muslims are evil” but suddenly find nuance and context when a Christian does something evil – “hey, not all Christians are the same.”

(Hell, it doesn’t even have to be a religious group. As previously mentioned, it can be any political, religious, racial, or social group that somehow becomes homogenous when ‘them’ and heterogeneous when ‘us’).

The onus is on people like you and me to make an active decision that every time we see a headline that makes us think “this is ridiculous” or “these people are the worst” that we take a few moments to dig and learn “is this actually a valid claim?

Hell, I wrote this because a woman wrote a long thoughtful about her kid growing up and wanting to be a Disney princess for Halloween. Her article explored races, the expectation of ‘princesses’, and more. After multiple instances of ‘A reporting on B reporting on C reporting on D” the headline shared on FB was “It’s racist to dress up as Moana,” and all the comments were some form of “people are such snowflakes and overly politically correct.”

The sad part was you didn’t even need to dig – the site posting this was Delish.com. Why else would a website that is ostensibly about food be posting this malarkey if not to bait you into sending them traffic?!

(Of course it’s the people who most loudly claim that we need more real talk and the world is too politically sensitive who are the first to jump to conclusions and yell that others are too sensitive).

We need more nuance in our lives. We need to stop extrapolating the behavior of a few idiots as reflective of any group.

Otherwise, that’s how we end up with idiots like Patrick: 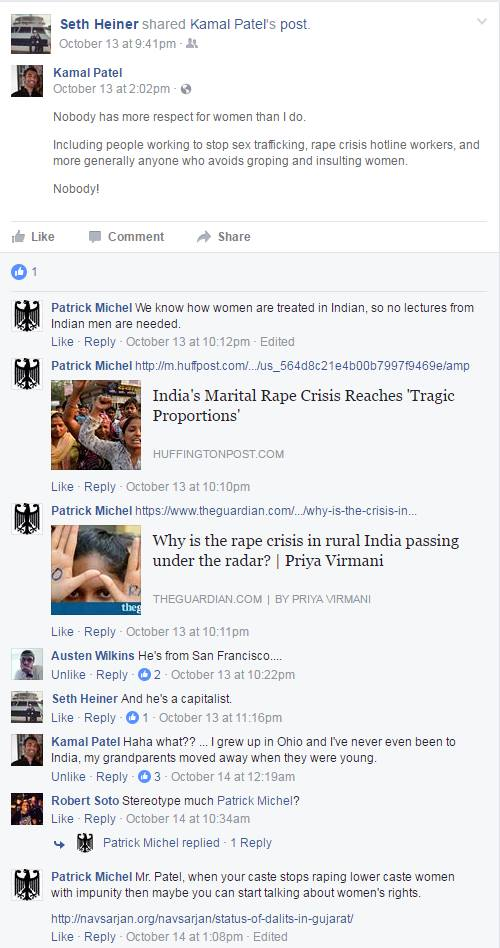