When I speak at events, I talk a lot about how a lack of focus will be why you don’t succeed.

For success, you need to focus on one business and not try to pull off multiple things. You must be singleminded in that pursuit, and not be waylaid by other shiny ideas. Which brings me to my latest failure: AudienceOwl (AO).

Between biz dev for Examine.com, meeting with awesome entrepreneurs for chocolate chip cookies (I may have something bubbling for the Toronto scene soon), and SJO.com, AudienceOwl was not given the full attention it needed. So while my co-founder Martin (more on him later) was grinding and doing an amazing job, me getting tugged in multiple directions meant my contribution to AO was subpar.

So what does AO do? Three primary things:

#1 lets you understand your customers

#2 helps you segment your audience.

#3 makes it easy for you to expand your network. Everyone talks about how your network is your net-worth – no one easier to network with than someone already following you.

Marketers love to talk about demographics and “knowing our customers” all the damn time, yet have no clue who is on their own email list.

And considering that your email list is likely your most valuable asset (just see what you can do with a little segmentation)… that’s a huge oversight. And thus a great opportunity in the marketplace.

How AudienceOwl got us into the mainstream

The first magazine we ever got into was Men’s Health UK. Years ago, when I first wrote what became AO, the software would run once a day to analyze all of our newest email subscribers and twitter followers. So I would load it once a day and manually see who was following.

One day a certain “Ed Vanstone” signed up. I forget what his email address was, but the domain was not something that would normally catch my eye. But his twitter bio caught my eye: 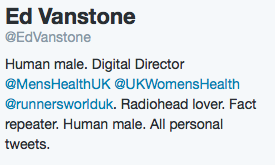 I quickly popped Ed an email saying something akin to “Hi, I’m Sol. Saw you following us, if I can ever help, just let me know.”

I’m a huge fan of looking at the past to learn what begat what. I’m a huge fan of being retrospective on success. And looking back – the start of it all was us being in Men’s Health UK. Since then, we’ve been mentioned in so many mainstream publications that I honestly cannot remember them all. And we got into Men’s Health UK because of AO.

Without AudienceOwl, Examine.com would have nowhere near the mainstream profile it does.

All this talk about how useful AudienceOwl is, and I haven’t even mentioned how we utilize AO to convert our customers into our evangelists (check out what Joey Coleman talks about), or how we use it to segment our email list.

Clearly, it does great stuff for us. We know the market needs it.

So how am I counting AudienceOwl as a failure on my part?

We know that AudienceOwl not just a great idea, we also know that the market needs it, and we know that it works. However, beyond my own lack of focus, the website itself was trying to juggle three things simultaneously:

All three are amazingly useful products on their own. But trying to explain all three simultaneously was a bad idea.

For comparison’s sake, Examine.com originally started just covering bodybuilding supplements, then all supplements, then nutrition. It began focusing on one area until it was a home run, and then focused on expanding into new arenas.

With AO, trying to convince someone to buy in across three “products” at once was a bad idea.

In short, I failed my own rule of focusing on one thing at a time.

A further failure to focus…

Those who know me well enough know that while I take few things seriously (thus why we have the #cookielife), I do take my responsibilities very seriously. My modus operandi when starting a business it to get things going, bringing in smart people, and letting them execute and KO.

The issue of the product messaging being diluted was raised by Martin himself. I was so distracted by other things that I did not notice what a blaring issue it was.

So here I was, doing a shitty job (if we are honest), but still hanging around. Why the hell was I sticking around? The todo list kept getting longer…

Business is not a vanity project. You either do the work or you get the hell out of the way. And I was just getting in the way.

The moment of truth

Two Fridays ago, I flew into NYC for the day for an event Todd Herman had put together – a fireside chat with OgilvyOne’s CEO. Afterwards we all headed over to the rooftop at Ink48. New friends were made, and of course the common “so what do you do?” question was asked. And as I deftly avoided the question (I hate it… but I’ll cover that another day), I realized that AudienceOwl was something I only thought of when people asked the “What do you do?” question.

Otherwise I just did not think about it.

The next morning I flew back to Toronto and called up Martin to let him know: “I’m out.” I wasn’t carrying my weight, and we both knew it. I was holding AudienceOwl back.

And so what now for AudienceOwl?

Martin is going to continue to develop it. I’m in the process of divesting my ownership so that it becomes Martins (as I said, business is not a vanity project). I lost money (~$15k). But it was a sunk cost anyway – it was time to cut my losses and move on.

At the same time, it’s a product I still fully believe in. And that’s what I’ve tried to thread throughout this article – that the failure was not the product; the failure was on me. And I specifically say on me – yes it was a failure, but in no way does it dictate that I’m a failure. That’s OK – shit happens.

Don’t take your failure at one thing to mean you are a failure.

What you need to learn from all of this:

So you have a few things to do: